Images of Rohingyas dead bodies in Sittwe
The photos were taken on June 13, 2012 at May Zi cemetery, nearby Baw Du Pha refugees camp in Sittwe, the capital of Rakhine State

Kaman Muslim children play as a woman prepare food near their tent at Sin Thet Maw relief camp in Pauk Taw township, Rakhine state, western Myanmar. Stranded beside their decrepit flotilla of wooden boats, on a muddy beach far from home, the Muslim refugees tell story after terrifying story of their exodus from a once-peaceful town on Myanmar’s western coast. The Oct. 24 exodus was part of a wave of violence that has shaken western Myanmar twice in the last six months. Photo: Khin Maung Win / AP

In this Nov. 11, 2012 photo, Muslim refugees who fled arson attacks that drove them from their neighborhood in the Myanmar port of Kyaukphu in late October sit under makeshift shelters beside their flotilla of wooden fishing boats on a beach in Sin Thet Maw, Myanmar. Stranded beside their decrepit flotilla of wooden boats, on a muddy beach far from home, the Muslim refugees tell story after terrifying story of their exodus from a once-peaceful town on Myanmar’s western coast. The Oct. 24 exodus was part of a wave of violence that has shaken western Myanmar twice in the last six months. Photo: Todd Pitman / AP

Chan Mohammad Arakani and 3 other friends shared a photo.

Why is the Genocide against Rohingyas and Kamans Triggered Now? (An Analytical Point of View)

M.S. Anwar
RB News
December 14, 2012
There are many reasons on why the violence against Rohingyas and Kamans started in 2012.
For the current pseudo civilian government, it is:
Why Now?
For the Rakhine (Magh) extremists, it is because:
Why Now?
So, it is the perfect time for Rakhine extremists to get rid of these Rohingya and Kaman barriers.
Why have Rohingyas become so vulnerable and been easily victimized today?
After 1942 Rohingya massacre, three groups among Rohingyas emerged.
However, later years, all Rohingyas came to understand that they could only exist in the Buddhist dominant Burma only when they could take up arms. So they did. An armed-group for Rohingyas’ freedom called Mujahideen emerged. (Note: The term “Mujahideen” becomes an extreme term used for the terrorists or likewise today. Mujahideen is an Arabic term merely meaning “Strugglers.”) But due to the lack of unity and common target among Rohingyas and their cooperation with the freedom-fighting group, the group’s struggle failed and they surrendered to Burmese army in 1961 but with a guarantee that Rohingyas would be full citizenship as well as equal rights. But later years, the Ne Win’s government not only refused to fulfill the promise but also started to persecute Rohingyas more than ever. Therefore, Rohingyas took up arms again in 1980s and their arm-struggling for equal status and rights in Burma was continual until 2000.
They completely abandoned armed struggling after 2000 and started to wrongly believe that they can gain their freedom and equal status by means of diplomacy and without arm-struggling. To me, it seems that abandoning arms completely is the biggest mistake that Rohingyas have ever made. Have any people in the world’s history gained what they wanted without armed-struggling? Diplomacy bears no fruits without the back-up of an armed-struggling!
Why Now?
Therefore, taking everything into consideration, the year 2012 is the perfect time for Bama fascist regime, racist Bamas and terrorist Rakhines to do what they want against these defenseless and helpless peoples called Rohingyas and Kamans.
M.S. Anwar is an activist and student studying Bachelor of Arts in Business Studies at Westminster International College, Malaysia 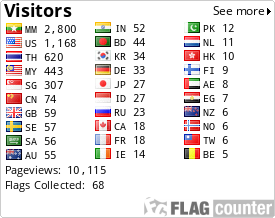